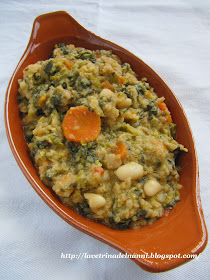 Yet another post in english dedicated to my "worldwide-pals"!
Today I'd like to introduce you a vegetable soup very popular in tuscany and so much apreciated by the tourists coming  in my region.

The "Ribollita" in the origin was created in tuscan's countrysides as a "poor" and simple vegetables soup in order to recycle the stale bread piled up during the week.

Although every restaurant in Florence and in Tuscany prepares and serves it's own recipe that can taste differently case by case, there are a few important rules that every "Chef" follows.


Tuscan gastronomes agree on the fact that this soup was certainly created using the variety of season vegetables available in late fall and winter, so there are some essential still points about the ingredients making a "first rule":
therefore for this soup you'll need this basic vegetables:

moreover:
- white tuscan "cannellini" beans (prefereably not the canned ones but boiled on your own!)

Another rule is to use the (unsalty!) stale bread piled up during the previous days and the last rule is that is preferable to eat this soup the day after, but having it re-boiled again (in-fact "Ribollita" in italian letterally means: re-boiled) and serve it hot and seasoned with a drip of raw tuscan extra virgin olive oil.


Traditionally the base of this soup is a simple sautéing in extra virgin olive oil of carrot, celery, and onion, (in Florence these ingredients besides to parsley are called in the whole "odori", that in this case can be translated into: "flavours"). But, in modern times for an unwritten rule of many restaurants, many chefs add bacon and/or pork fat to flavour this soup. Obviously by this way cannot further be considered the traditional one but just one of some variations on "Ribollita" theme.

About this traditional recipe I remember when I was on the point of teaching the "Ribollita" in a class at school to a british vegetarian family of indian origin, after reading the ingredients they asked me if we could make it without pork, as by travelling in Italy and having tried several restaurants they had come to the idea that it was a necessary ingredient in every soup!
When I assured them that the "real" one was without and it was by far much better, they thought that actually I was making an exception and were grateful to me for doing this... but IMHO that's the way the "Ribollita" has to be made!!


Put the white beans in a pot with cold water and let them soak for a whole night, then drain this water and pour some new one in the pot, up to cover the beans.
Add the sage and the garlic and bring to simmer on gentle heat. Cook until beans are tender but still entire. Let cool then remove the garlic and the sage

Wash and rinse all the vegetables, cut the cabbage in thin stripes, remove the rib by the kale leaves and chop them (the leaves!), chop also the chard.

Mince finely onion and garlic , cut celery and carrots in small slices and put everything in a large pot with the extra virgin oil.
After a few minutes add thyme, potatoes cutted in cubes and all the vegetables leaves chopped previously.

Cook for a few minutes, then add the tomato paste (or the peeled ones), stir and cook still some other minutes.

Strain a third of the beans and save them for later, then grind the remaining two thirds with their broth and add to the soup.
Season with salt and cook the soup between 45 and 60 minutes, depending on the size of vegetables cutting.


At the end of cooking add the entire beans left previously apart then cut the bread in thin slices, add it to the soup and stir to soak it entirely. Put off of the heat and let cool completely, stirring every once in while and adding salt if necessary.

Rest in the refrigerator till the following day.

Before serving it, put the soup in a pot, if too dry add some vegetable broth and bring to boil.

I wish I meet you soon in Florence at the cookery school where I'm a teacher to enjoy cooking with you!!

You can keep in contact to follow all school activities by subscribing as a follower to the school blog or directly writing at: